Today, Thursday, on January 20th, 2022, a large crowd of the sons and daughters of Raqqa participated in a mass march to denounce the Turkish practices against the regions of North and East of Syria, its occupation of Syrian regions, its flagrant violation of human rights with its mercenaries, and the perpetration of crimes against civilians, including children, women and the elderly, such as killing, displacement, rape and the demographic change.
A large gathering of the people of the city and its countryside participated in the march, in addition to community activities, the Zenobia women’s gathering, the Martyrs’ Families Foundation, and the people’s councils and houses in the city’s countryside.
This march coincided with the fourth anniversary of the occupation of Afrin by Turkey and the affiliated factions that were a reason for displacement thousands and destruction even trees.
The march started from Al-Itfaiyea Square towards Al-Rasheed Park to stop at Al-Naeem Roundabout, where some speeches were delivered by the Raqqa Council, the Military Council, the Martyrs’ Families Foundation, and the Zenobia Women’s Gathering.
Those speeches urged to continue the struggle and confront this occupation until liberation and appealed to the international community to play its role in standing up to the barbarism of the Ottoman occupier, deterring it and helping the peoples of northern and eastern Syria for liberating its usurped lands, whether they were Afrin, Ras al-Ain and Tal Abyad.
Yesterday, It was noteworthy that several political and societal institutions, parties and the Syrian Democratic Council issued a statement calling on the international community and Arab countries to oppose the Turkish expansionist policy and called on all Syrian democratic forces to cooperate in order to end the occupation of Afrin and the rest of the regions.

At the Invitation of the SDC, Dignitaries of Raqqa Support the National Project and Formation of a Committee to Follow up on Tribal Affairs

On Wednesday, a large gathering of sheikhs and notables of Raqqa discussed the mechanisms of reaching a societal and political cohesion during a symposium held in the meeting room of the Syrian Democratic Council in the... 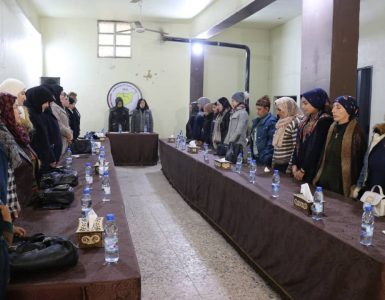 Yesterday, on Sunday, in Al-Sheikh Maqsoud neighborhood of Aleppo, a group of Syrian women met and held a symposium to discuss prospects of a political resolution and ways to restore the occupied Syrian territories...

A Telegram of Condolence

It is with great sadness and deep sorrow that we received the news of the death of the Egyptian figure, Rajaie Fayed, the Chairman of the Egyptian Center for Kurdish Studies and research. The late man was one of the...