Aleppo people demand an end to the Turkish occupation of Afrin

Today, thousands of displaced people from Afrin and the people of Al-Sheikh Maqsoud and Al-Ashrafieh neighborhoods took part in a mass march with the participation of political parties and civil society institutions for demanding an end to the Turkish occupation of Afrin, in coinciding with the fourth anniversary of the start of the Turkish occupation’s attacks on Afrin.

During the march, which was under the slogan “We are all stand by the liberation of Afrin”, a speech was made on behalf of the Syrian Democratic Council by a member of the Public Relations Office, Fatima Al-Husseinou, in which at first, she praised the resistance and steadfastness of the people of Afrin in the displacement camps, and touched on the historical and expansionist Turkish ambitions in the region.

She condemned the Turkish attacks on northern and eastern Syria, targeting safe civilians, destabilizing stability and killing innocent women and children during the international silence and the guarantor parties.

During her speech, Al-Husseinou emphasized the priority of Afrin liberating, “Regarding our role in the Syrian Democratic Council, we affirm that the Afrin issue is a national issue and the task of its liberating is the task of all Syrians. Therefore, we reiterate our emphasis on the priority of liberating the Afrin region and all occupied areas and also we assure on the safe return of its original inhabitants.” She spoke.

She stressed that the solution for the Syrian crisis is through the Syrian-Syrian dialogue, the solidarity of Syrians, and the endeavor of all Syrian parties towards a peaceful political solution through dialogue and the unification of their forces in order to get rid of occupation and tyranny and also, she assured on an establishing a democratic, pluralistic and decentralized Syria for all Syrians. 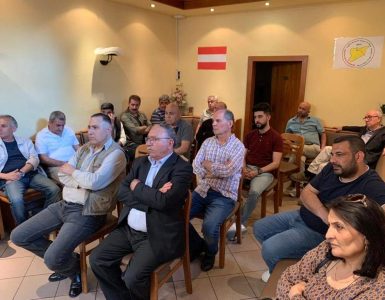 On Sunday, May 15th, the Syrian Democratic Council organized a lecture entitled “The Affiliation of Kurds to Syria” at its center in Vienna, the Austrian capital, where it was delivered by the writer Alan Pirray. The...

A declaration of the third Stockholm consultative meeting

At the invitation of the Preparatory Committee of the conference of Democratic Forces and personages, a consultative meeting was held in preparation for the hoped-for conference, in cooperation with Olof Palme...

On Sunday, May 15th, the third Stockholm consultative meeting ended its work, with a statement and a draft preparing for the conference of Syrian Democratic Opposition Forces and Personages, which was attended by 35...