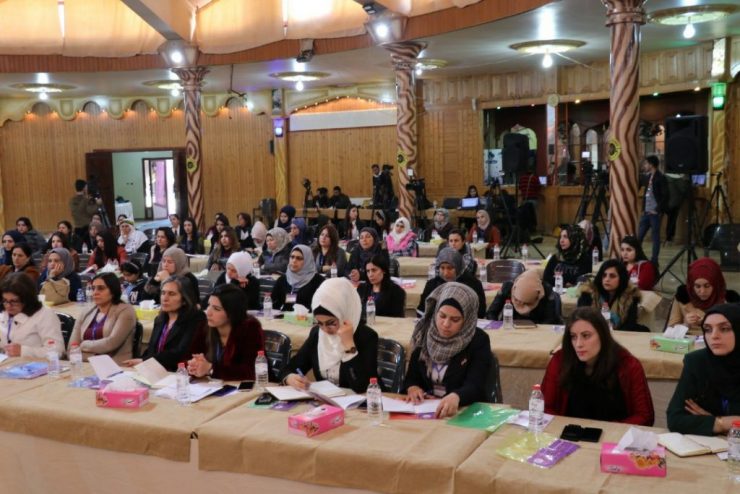 Today, the Syrian Women Council in Amouda, west of Qamishlo, organized a forum on women in light of the Syrian crisis: repercussions, resistance, and prospects, in presence of more than 160 women from various Syrian regions and governorates.

The forum dealt with several sessions, and each session included different axes. The first session discussed the repercusions of the Syrian crisis on women in terms of social, psychological, and economic aspects, in addition to discussing lawful aspect of crimes and violations against women.

The second session discussed the resistance that women displayed during the Syrian crisis, where the axis took strategic and military doctrine that Women Protection Units followed in their war against the aggression, and stressed the necessity of its continuity and development as a strategic option to preserve the gains of women and achieve more of them.

In addition to themes of research in the options that women should go into politically and put forward to develop them according to developments in the region and the world.

About the aim of holding such a forum, the general coordinator of the Syrian Women Council, Lina Barakat, says : that it is necessary for Syrian women to meet and discuss the conditions of women who have paid exorbitant prices due to the crisis that is approaching to its tenth year.

Barakat added that the forum is expected to come out with proposals and solutions that would protect women and preserve their gains made thanks to their big sacrifices.

A final statement was issued by the forum, in which the participants appreciated the leadership role that women played in North and East Syria in all fields, in particular Women Protection Units in ending ISIS geographically and in field.

The closing statement also included a set of recommendations :

The activation of charters adopted by international community organizations in facing violations against women would put an end to such violations, especially by fundamentalist Islamic groups supported by Turkey.
Putting an end to the interference of regional states, especially the Turkish state, in Syrian internal affairs would stop the crimes committed against women in Syria in general and North Syria in particular in the occupied areas (Afrin, Idlib, Sri Kaniye/Ras al-Ain/ Kri Sbei / Tal Abyad, Azaz, Al Bab, Jarablus and others ).
The violations committed against women in the context of the crisis in the country amount to war crimes and crimes against humanity and this is what requires establishment of a special international criminal court to prosecute all parties involved in these violations and provide protection for women and ensure their rights in accordance with international humanitarian covenants .
The processes of demographic change and ethnic cleansing along the Syrian geography, especially in the territories occupied by Turkish state and its mercenaries, have a profound impact on women and are an additional reason for their sufferings and deterioration of their psychological and physical health. At the same time, such actions
promotes the culture of hatred among Syrian components. This matter requires organizations, powers, institutions and intellectual elites, human rights organizations , political and relief institutions, local, regional and international, to intensify their efforts to limit and defame these operations to compel the United Nations and its institutions to carry out their responsibilities towards Syrian women and this would enhance international security and peace.
Due to psychological disturbances that women suffer from and in order to rehabilitate and reintegrate them in society, there is a need for projects and centers for human development and rehabilitation, and it is the responsibility of international organizations, local, regional and international powers to support these centers and projects.
Due to destruction of the infrastructure, migratory operations, displacement, and imposition of blockade, most women live below the poverty line and find it difficult to secure a livelihood. There is a need to establish economic projects that secure job opportunities for them and preserve their dignity, and their support lies on shoulders of international, regional and local powers.
Given that the victims are women in various regions that have witnessed battles and conflicts between armed opposition and central authority and those areas that were occupied by Turkish state, women were subjected to almost the same crimes and violations. In order women to be able to protect their freedom and rights, there is a need for a new political, human and social system that is an umbrella for all organizations, institutions and centers concerned with rights of Syrian women.
The active participation of women in drafting of any new national constitution for the country and giving them place in future projects that are devoted to reconstruction would guarantee women’s rights and alleviate their sufferings.
Prepared by
Media of the Syrian Democratic Council A Statement for the Public Opinion

The Turkish President Recep Tayyip Erdogan threatened to launch a military operation in northern Syria once again, declaring that its goal is to create “a safe zone”, citing as usual the protection of Turkish national... 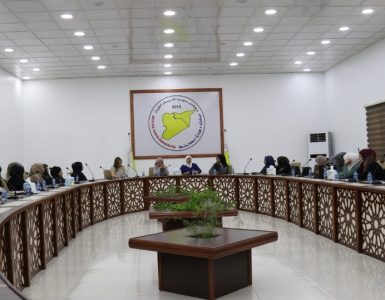 During the developments in the northern and eastern regions of Syria, the Women’s Bureau of the Syrian Democratic Council reviews the political situation and holds a dialogue seminar for the administrations of councils...

On Sunday, May 15th, the Syrian Democratic Council organized a lecture entitled “The Affiliation of Kurds to Syria” at its center in Vienna, the Austrian capital, where it was delivered by the writer Alan Pirray. The...